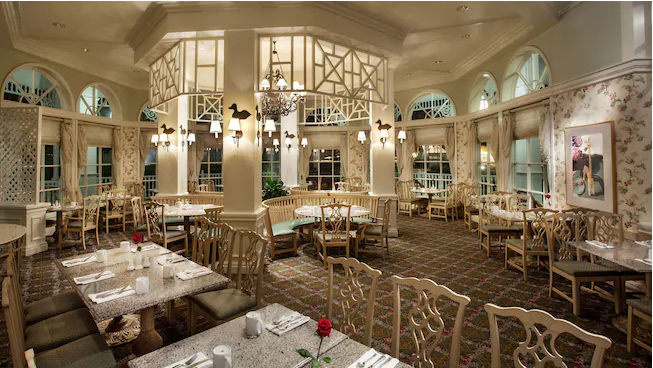 Grand Floridian Cafe is considered a casual table service restaurant and reservations are usually available a few days before you want to visit. It’s themed in the Victorian style like the rest of the hotel but the decor is more like your best friend’s parents dining room from the early 90s with the pickled wood, heavy curtains, and floral wallpaper.

The menu has an American flair and is very family-friendly as my preteen boys had no trouble finding suitable entrees. To start the table is served warm wheat rolls and honey butter. I think we went through two full baskets of bread with our growing boys.

We started with the house-made fried mozzarella and it was delicious with the tomato jam. Wish the serving was a bit larger as we were splitting it with the four of us but next time we will probably order two. If I was really hungry I would have ordered the heirloom apple salad as I love a salad with fruit and the prosciutto sounds like a great addition.

As for our entrees, my husband is a sucker for Shrimp and Grits and this one did not disappoint. The mascarpone in the grits made them super creamy and a nice compliment to the shrimp.

I’ve been trying to eat healthy and wanted to try Sirloin Steak and Scallops with the scampi sauce and scalloped potatoes as it sounds amazing, maybe next time, so I settled on the Cast Iron Seared Pork Chop with pappardelle pasta, mushrooms, and marsala sauce. Can you say yummy? I cleaned my plate it was so good.

My 12 year old ordered the Buttermilk-Fried Chicken that came with loaded mashed potatoes and vinaigrette. He was unsure about the vinaigrette so he got it on the side and ended up liking it. Not a speck of food was left by the time he finished eating so I take that as a good sign.

My youngest still likes eating off the Kids Menu and chose the Cheese Flatbread which he said was really good. They served sliced apples (other sides available) and a dessert of Worms in Dirt which is basically chocolate pudding with crushed Oreos and gummy worms.

Since it was my birthday they gave me a vanilla cupcake with sprinkles and it was tasty, but nothing special. My husband ordered the Neapolitan cheesecake and said it was really good and the presentation was nice too. The Key Lime Pie and Chocolate Fondue looked like good options for next time when I’m not trying to eat healthy. We timed dinner to coincide with the start of Happily Ever After Fireworks at Magic Kingdom so as soon as we finished eating we went out the back entrance of the restaurant which was right next to the marina. There was a small crowd gathered to watch the fireworks and the music was piped in. The views were pretty good but I still prefer the beach at the Polynesian to get the full effect. Overall it was a great dinner and evening to celebrate my birthday. We will certainly go back.