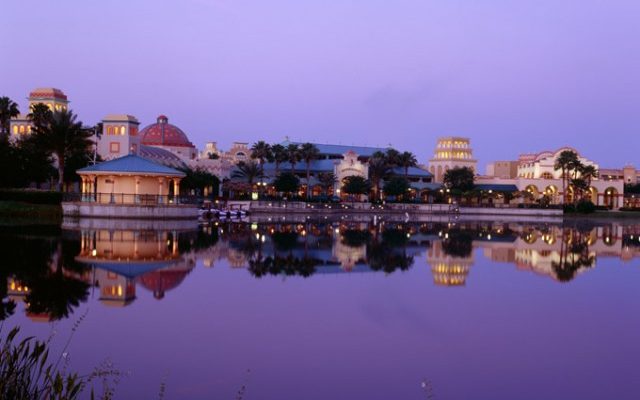 I recently came back from my 2nd trip to Walt Disney World® Resort with the family.  We decided to make the trip after New Year’s when we found out that school wasn’t starting until January 9th.  This would give us plenty of time to avoid the crowds from the holiday season and get back home in time for the first day of school.  On our first trip last year we stayed at the Wilderness Lodge.  As much as I loved our stay at that resort I decided we should try a different location and our wallet demanded we did.  After a long debate we chose Coronado Springs which is a moderate resort.  I initially booked us at Pop Century which is a value resort but for a little bit more we could get a larger room with 2 queen beds instead of doubles.

The resort ended up being a very nice surprise.  Other than feeling like I was spending the night in a Mexican restaurant (theming is based on Southwest, Spanish, and Mexican cultures) the resort was a nice break from the hectic parks.  The theming isn’t very “Disney-ish” so if you are wanting a constant reminder of Mickey and friends then this isn’t the place for you.  There are several buildings clustered around the lake which makes the property rather large.  An internal bus system helps to minimize walking and also serves as the transportation to the parks.  Coronado Springs was one built in 1997 and is in close proximity to the parks.  Our building was the last bus stop on the internal bus system so we were able to get to both Epcot® and Disney’s Hollywood StudiosTM in about 7 minutes. Disney’s Animal Kingdom® Theme Park and Magic Kingdom® Park were both about 16 minutes away.

Coronado Springs is also a convention center so one of the sections of rooms is dedicated to convention guests.  Each section has its own “quiet” pool and there is a main pool with a pool bar, lifeguards, and a water slide shaped like a pyramid.  My kids are not the best of swimmers yet so I was pleased to see a box full of life jackets for the kids.  Since we were there in January I was very surprised that we were able to swim but the pool is heated year round.

The main restaurant, Pepper Market, is considered a quick-service restaurant and it’s very good.  The set-up is quite different from other restaurants.  When you’re seated your waitress will give each table a ticket.  There are several stations set-up around the room where you can get children’s plates, sandwiches, hot plates, and my favorite, the burrito/quesadilla station.  Once you ordered each item the server put a stamp on your ticket.  Then after you finished eating you checked out and paid for what you ordered.  There was also a bar named Rick’s and a self-serve to-go station where you could get pizza, breakfast/bakery items, drinks, etc.

Our room was very spacious, clean, and quite.  We enjoyed having 2 queen beds but the best part was the bathroom.  One room included the tub and toilet separated by a door and the area with the sinks was large and housed the closet area.  This section was separated from the bedroom area by two wooden sliding doors.  It was nice for me to shower and then have extra space to get dressed without having two small children staring at me the entire time.  Since there are several bus stops throughout the complex we were only a minute away from ours and that was if we walked very slowly.  It was about a 10 minute walk to the main building but we rarely had a need to go there.

I highly recommend a stay at Coronado Springs, especially if you are looking for a quiet and relaxing retreat from the parks.