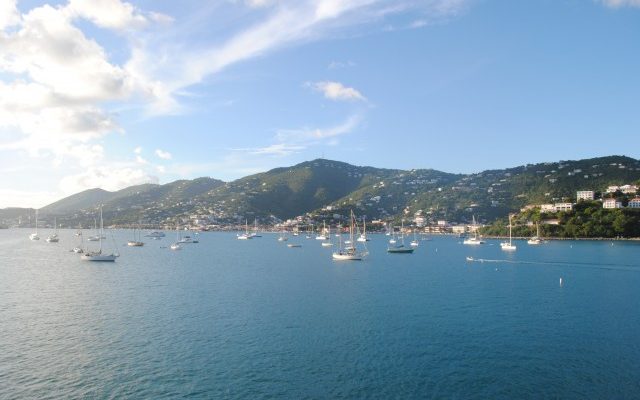 This past fall I was honored to sail on Celebrity Cruises’ ship the Summit in the Southern Caribbean with several other advisors.  We departed out of San Juan, Puerto Rico for 7 days of fun in the sun!  Prior to departure I stayed one night at the Ritz-Carlton San Juan located close to the airport.  I decided to arrive in San Juan a day earlier in case of flight delays so I wouldn’t miss the ship.  This is a good idea for any cruise because you never know what might happen with your flight and baggage.

The ship isn’t a very large ship, only about 2200 passengers, and has been updated recently to reflect the theming of the newer Celebrity ships.

Our first stop was the island of St. Croix in the USVI where we met a fantastic guide, Prince, who drove us around for two hours and showed us the sights.  The island is small and very quaint and there are only a few resorts.

Second stop was St. Kitts and we found another driver right off the dock who took us again on a tour of the island.  We made a stop at the Romney House where we saw a demonstration of batik printing and a few other scenic stops around the island.  Our last stop was at an overlook where you could see the island of Nevis.

Next we went to the island of Dominica.  I found an open-air van taking tourists on a tour of the island.  We stopped at several local tourist attractions and a scenic overlook.

Then we went to Granada where we had booked an excursion through Celebrity where we were going to tube down a river.  This was very easy to do as they had guides navigating you through the rocks.  The water isn’t very deep so if you had to you could stand up.  This was the farthest south we went and the weather was very warm in early November.

Our one day at sea took us north towards the Virgin Islands.

Last stop was on St. Thomas in the USVI where we took a bus to the Magen’s Bay area for a little R&R.  Afterwards we ate a little lunch and did some shopping.  St. Thomas is definitely the place to shop if you’re into jewelry.

Life onboard the ship was very pleasant.  The staff was attentive and the food at dinner was excellent.  The highlight of everyone’s afternoon was the 4pm Zumba class on the pool deck.  It was great for people watching if you’re not into that much activity as men and women young and old participated.  Our room was small but had plenty of storage for our suitcases and a week’s worth of clothes.

Celebrity sails all around the world and are known for their service and cuisine.  If you ever get the chance to sail on one of their ships I highly recommend it!